Throughout my time at Clarkson, one of my favorite things I’ve looked forward to is ski season. When you go to a school where the temperature can drop to the single digits (or negatives), it’s important to make the most of it and get active. I grew up in a small town in Massachusetts where our idea of skiing was freezing on a chairlift for 10 to 15 minutes and skiing down a glorified hill in about 30 seconds. When I came to Clarkson, I could not believe the opportunities I had for mountains.

Here is a list of some of the mountains close to Clarkson that you should check out.

Whiteface Mountain
Just from its nickname “Iceface” — you can tell this mountain is a beast. This place has a lot of character, as well as history, since the 1932 and 1980 Winter Olympics were hosted at nearby Lake Placid. For a Clarkson student, this will probably be your go-to mountain. Whiteface is only about an hour and a half drive from Clarkson’s Potsdam campus. This mountain sports multiple types of trails for all skill levels, including glade skiing, which I recently discovered myself.

Whiteface has the highest skiable terrain in the Northeast! As you ride the chairlift to the summit, you can notice the extreme elevation compared to that of other mountains. Whiteface has a vertical of 3,430 feet, which is about 380 feet higher than that of Killington. If you are able to ski here when conditions are fresh, it’s some of the best skiing in the Northeast. For about two weeks out of the year, Whiteface opens its infamous “slides,” which give you a taste of some real backcountry skiing, similar to the skiing out west. If you are lucky enough to be at Whiteface when the slides are open, I highly recommend you go.

Other than going to Whiteface to ski, you can visit the town of Lake Placid, which has plenty to offer. You can tour many of the Olympic complexes, such as the hockey rinks, ski jumps and trainings sites, which are still used for elite athletes. In the winter, you can even go ice skating on an outdoor Olympic speed skating rink or sled down the bobsled track! After a long day of skiing, nothing beats getting ice cream at Ben and Jerry’s and a burrito at Wyatt’s, my two favorite spots to go to after skiing.

Whiteface Mountain is a great ski resort with plenty to offer for people of all ages and experience levels. Being so close to this mountain as a Clarkson student is a commodity you can’t pass up.

Gore Mountain
This one is a little bit more of a drive, but definitely worth it. From Clarkson to Gore, it’s about a two-and-a-half-hour drive. Despite being a little farther away than Whiteface, Gore Mountain can be a lot of fun. I like Gore because of its extensive trail network. It could take you the whole weekend to ski the mountain! Gore has a total of 121 trails, and even has a section called Little Gore if the main mountain isn’t enough for you.

If glade skiing is your thing, this is a great option for Clarkson students who don’t want to drive to Vermont or other areas with backcountry skiing. Within reason, you can typically ski most of the terrain on Gore, including its woods. This can be a lot of fun on great powder days. One setback to Gore is that it lacks a big ski town like Lake Placid. However, this can be a good thing because Whiteface can be a lot more crowded. If you’re looking for a more local and family-mountain feel, this is the place to go.

Titus Mountain
This mountain is smaller, but can be a lot of fun. If you’re like me and grew up skiing smaller local mountains, then this will remind you a lot of that. Titus is located in Malone, which is only about 50 minutes from Clarkson. If you are trying to get away for the day or relieve some stress, this can be a great option. This will be the closest mountain to get to if you don’t like to drive.

Another fun option this mountain has is night skiing! This can be a lot of fun for you and your friends after a test or a long day of classes. Make sure to go on Thursdays for College Daze, which offers $20 all day/night skiing passes for students who show their student ID (your student ID will also get you $5 off any day other than Thursday).

Jay Peak
Now, this one is a long drive from Clarkson, but one of my personal favorites. Jay Peak is about a three-hour drive from Clarkson University. The mountain is located almost on the Canadian border in Vermont. It is so close to Canada that I often start getting Canadian cell phone service when I get to the mountain!

If powder skiing is your thing, this is the place to be in the Northeast. Jay Peak has a small-mountain feel but an out-west type of skiing. There are plenty of trails and glades to keep you busy for a full weekend. My personal favorite is the Beaver Pond glades. If you have two cars, you can attempt the infamous “dip” run. This is a special glade beyond the Timbuktu glades that puts you out by the road down the street from the resort. The idea is to have two cars to shuttle your friends and you from the resort to the dip parking down the street. Make sure to not go too far to skier’s right or you might just end up too far down the street and be waiting on the side of the road for your friend to pick you up. I learned this from personal experience.

There are some hostels or cheap housing options you can stay at by the mountain, or you can opt to stay closer to Burlington and experience everything this great city has to offer. Despite being a long drive, if you are an avid skier like me, this is well worth the drive. 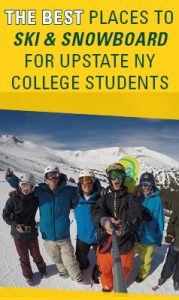